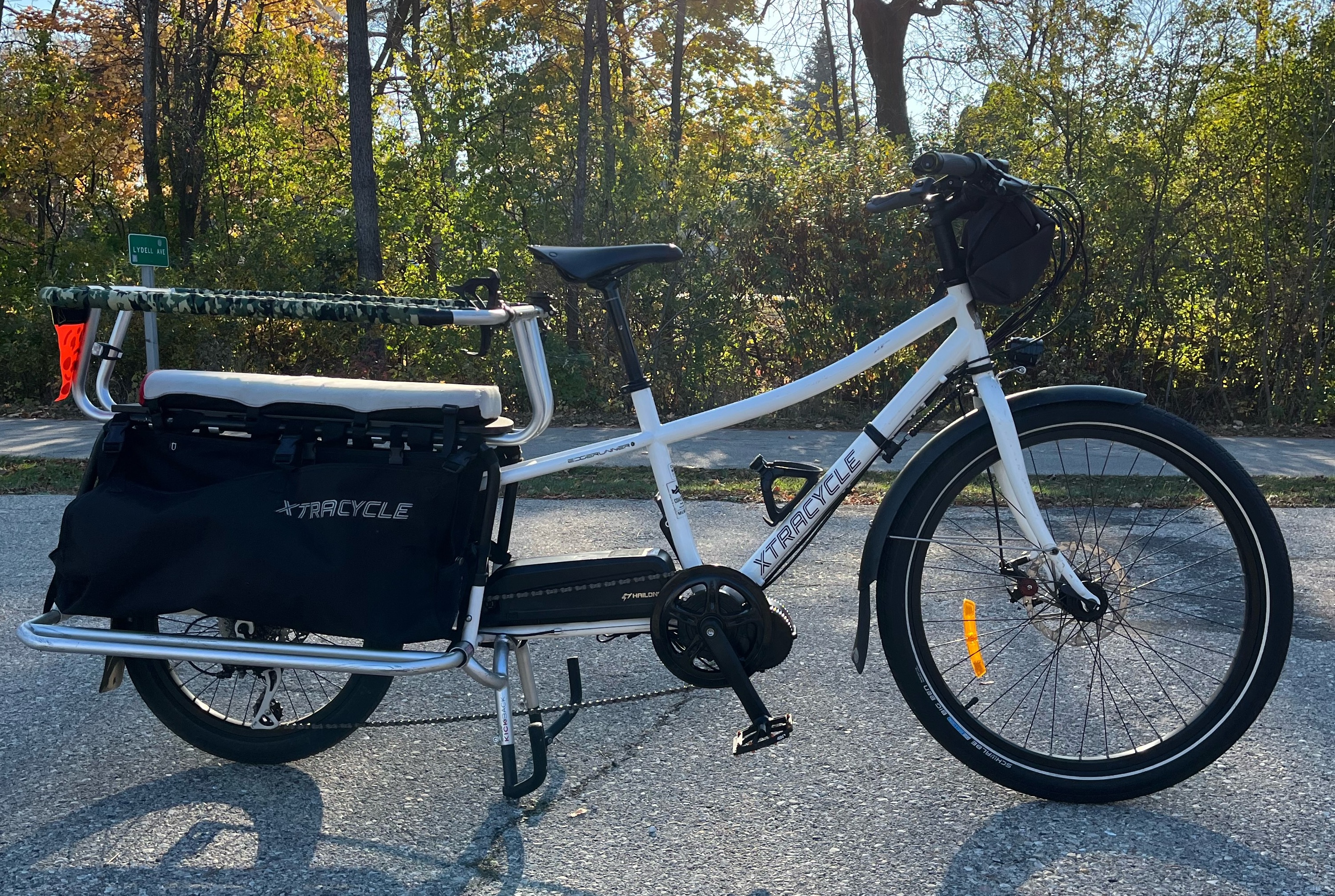 We’ve been constantly in search of mobility soltuions that allow us to be a one car family. For backgoround, during the pandemic I shed my Subaru; with work at home and schools closing (for our 6yr old) the transition to one car was easy. When we were asked to start coming back into the office, school and extracurricular activities started spinning back up we definitely started feeling the pains of one car. We did end up folding and getting a second car again but this time opting for electric. As a bike family we also had an accoustic Xtracycle Cargo Bike (they have since moved to e-only options) for kid carrying, errand running, haulin-hauler in the garage. We love this bike but with size, effort due to weight, it more gets sidelined during the week and used for weekend rides as a whole group to the farmer’s market, brunch, etc.

In researching options, we chose to pick up a RAD bike. We had tested one a couple years back when a couple got a flat in front of our house and we took them in to help repair. After repairs, we got a demo ride and it was fun and impressive. It solved an amplified problem on a cargo bike… they’re heavy even when not loaded up with a kid, a dog, and groceries, etc. So we opted for the RAD Runner to keep cargo capability, kid carry and shorter wheel base to be able to be loaded on a tail hitch rack. The shorter frame was felt quickly - with a kid strapped in the Yepp bike seat we were already out of room - and the smaller wheel size changed the riding style considerably. Electric fucntionality was great, but we compromised too much of everything else we needed.

Finally, Surly and Xtracycle entered the market with their shorter base cargo electric options. The one part that pained me, besides the price points, was that we had a perfectly good cargo bike in our garage that had lots of fond memories. In my opinion, bikes are meant to be changing and upgradable so the only real solution was to retrofit the current bike with a motor and battery.

I cant say for certain, but it appeared that Bosch had dropped their retrofit options going solely for new build. Additionally, it seemed Bosch took a closed loop approach in service options, similar to John Deere (booooo), they seemed to want to be the only ones servicing their equipment… which felt very anti-bike culture. That only left Bafang as an option. I was less concerned about battery and fire issues as I knew Bafang had been around long enough that most their power management issues were in the past. 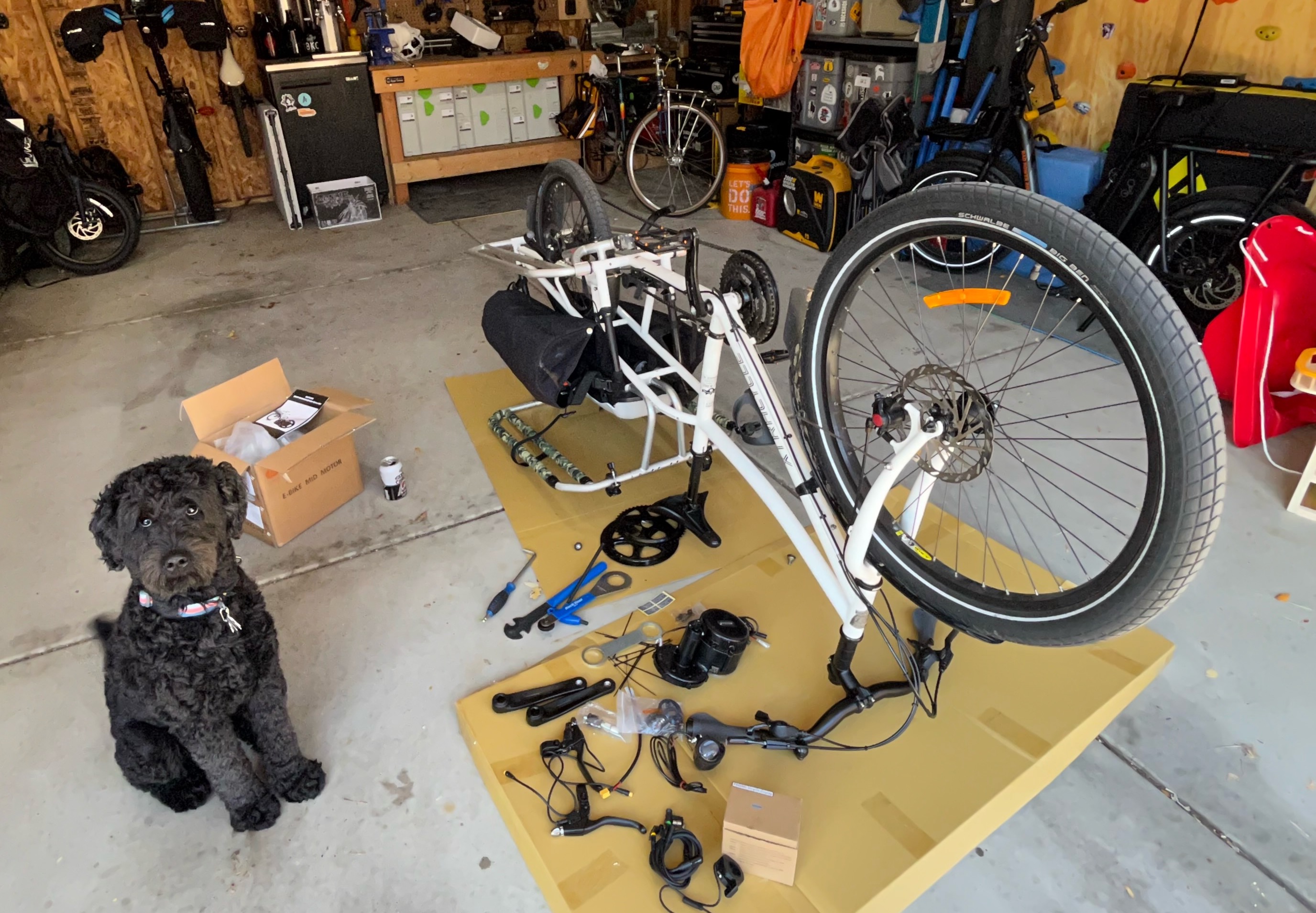 I ordered the kit in similar sizing to the one that was inlcuded in the RAD bike and then I needed to math out what size battery that would support a round trip to work (12 mi) and get home with a comfortable non-range anxiety inducing ~20% battery left. This should make adequate space for some errands, weight add, and weather conditions. This turned out to be not much of an issues, with e-assist the weight of the bike becomes less of a concern allowing you to battery up to whatever - I went with a 48V 15Ah battery which gives me an estimated 35 miles of range. Ha. I think we’re safe. 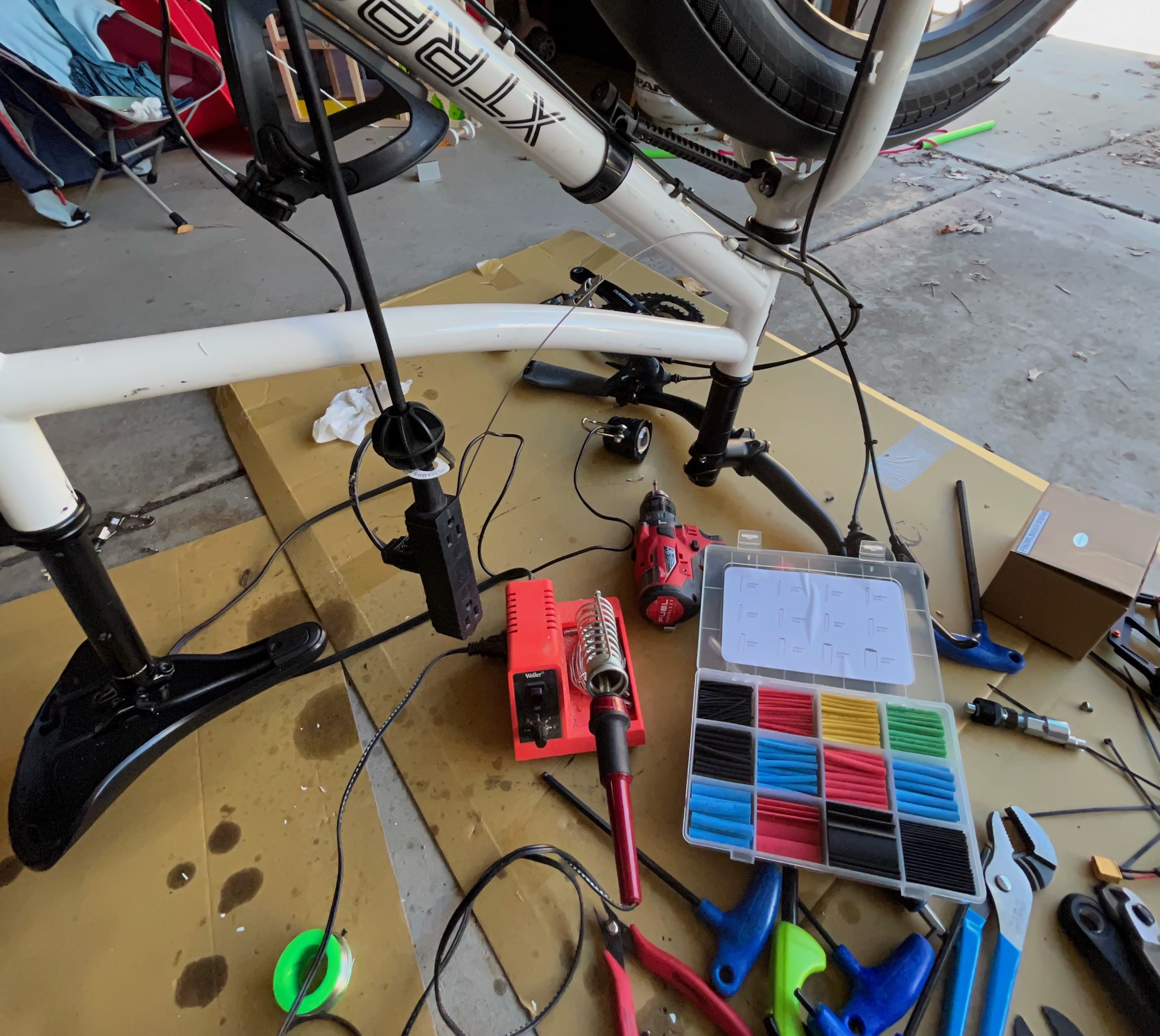 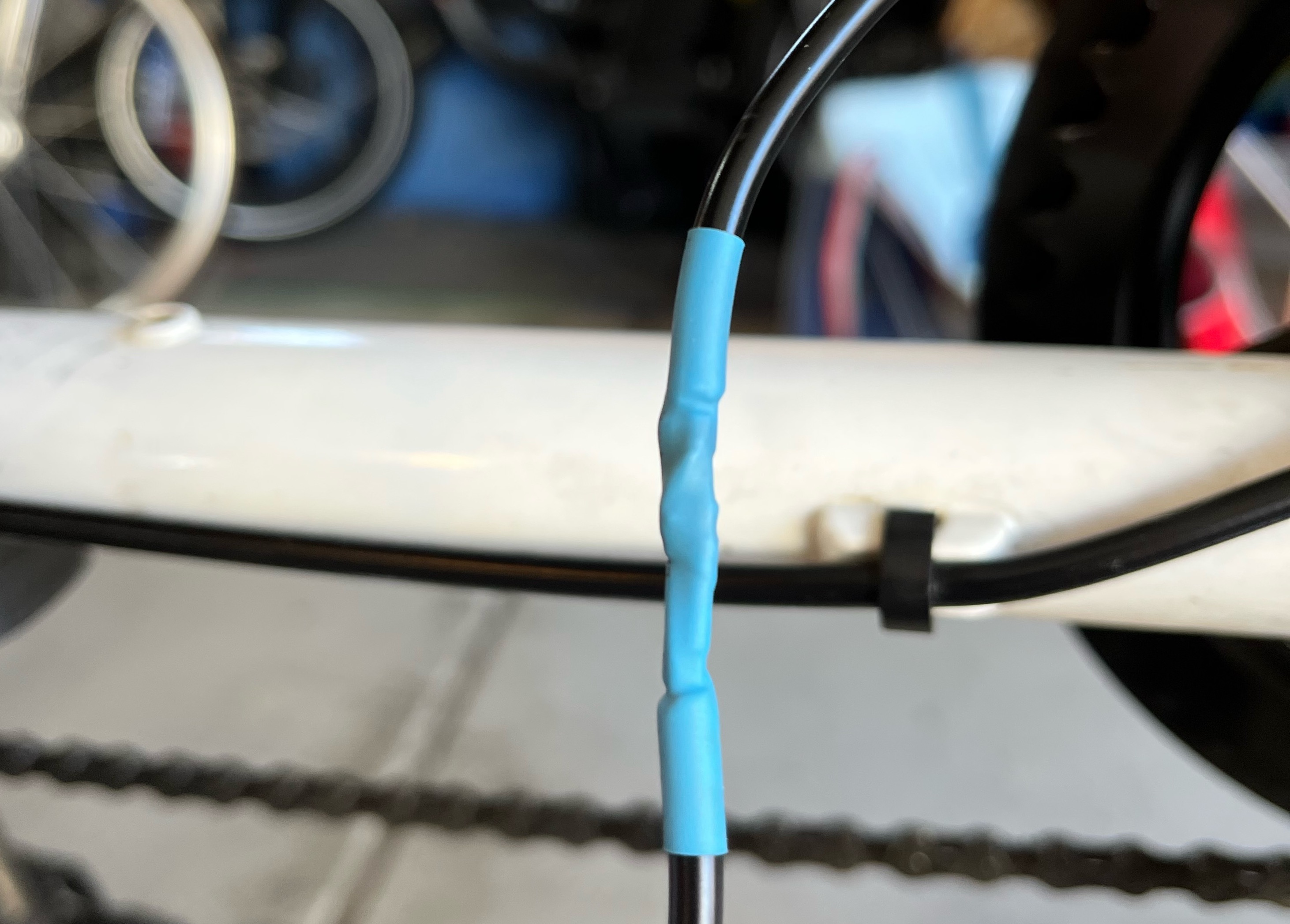 The install was clean and straight forward. The bottom bracket mid-mount motor was easy to install and kept weight distribution comfortable and natural feeling. I did, somehow, sever the speedometer cable during install and had to subsequenly pull out the multimeter to troubleshoot what looked like a quick solder and shrink tube fix. The frame extension from behind the seat tube left plenty of storage room for the battery and when complete the unit really blended in with the bike - knowing it’s mostly a necessary evil, downtube battery mounts just still look so out of place to me. Being it a cargo bike I did have to order up some extra extensions for some of the cabling that has to run all the way to the rear of the bike. A tail light also wasn’t inlcuded so I still split the line to the front light and did some hacking to get a proper rear light installed. Cable management is oddly satisfying. 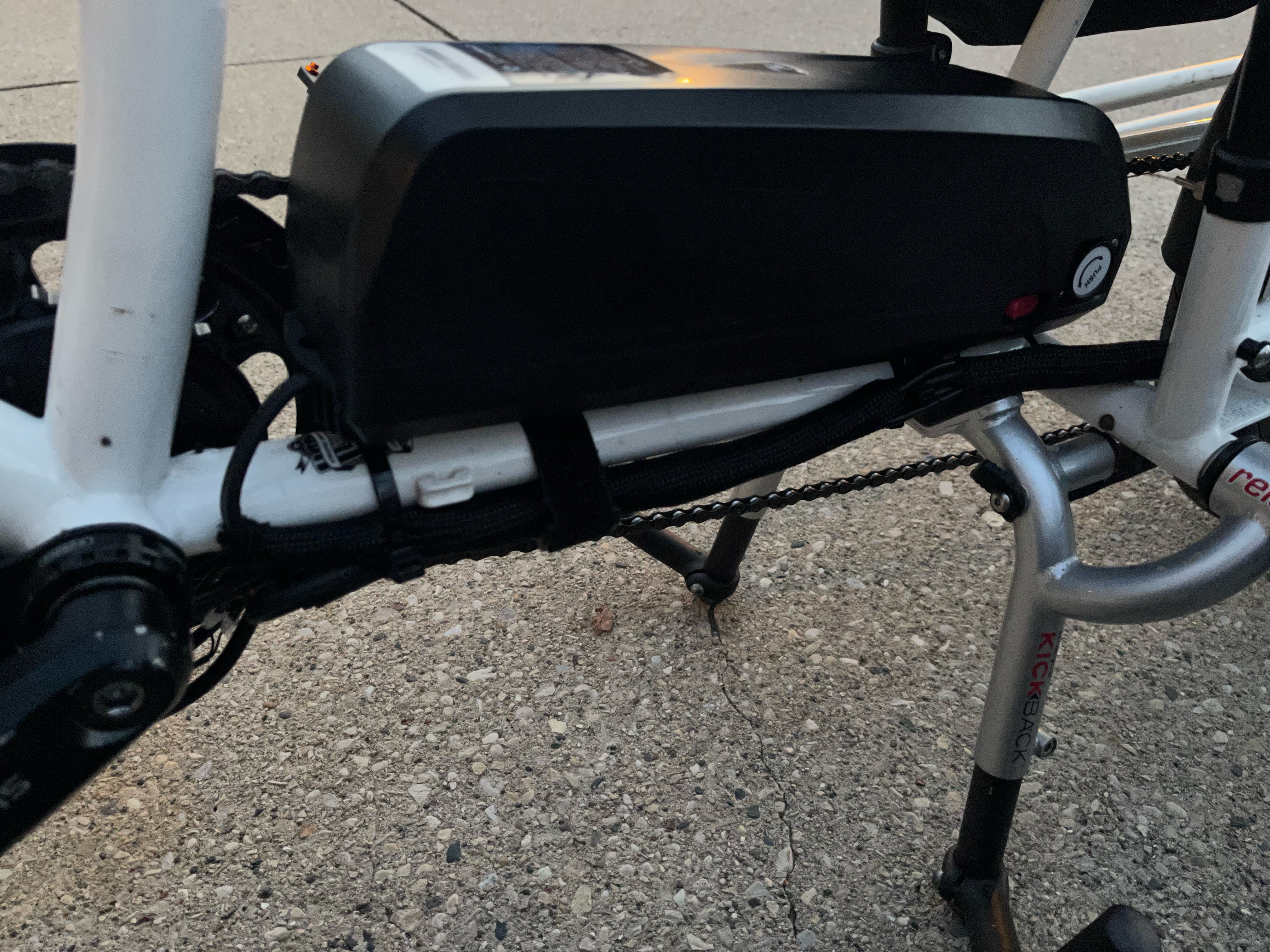 We plan to stay electric for transportation and hopefully back down to one car now with the addition of this sweet upgrade.